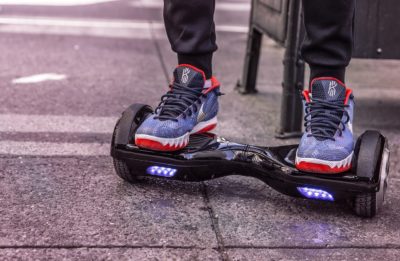 Hoverboards are the latest fun craze for young and old!

Adults and kids alike enjoy zipping around on these modern self balancing scooters. But, what special features should you look for when buying a hoverboard for kids to use?

We’ve done the research for you, gathered the answers to your FAQs, and summarised the hoverboard reviews from around the web.

Hoverboard skins and covers for kids

What is a hoverboard?

A hoverboard is a self-balancing, battery powered, two-wheeled scooter.

They usually have two wheels arranged side-by-side, with a platform between the wheels for the rider to stand on. They are controlled by the rider’s body movement while standing on the board, as the board senses the rider’s movement with gyroscopic, sensored pads.

Unlike other forms of electric scooter, hoverboards do not have any handle. Steering is controlled by shifting your body weight while standing on the platforms.

In “Back to the Future” hoverboards floated above ground. However, the scooters currently known as hoverboards don’t actually float. They have two wheels which are (generally) touching the ground.

They may give you the feeling of hovering, as they operate with the same body movement action that you’d expect from a truly hovering board.

Hoverboards that actually fly do exist! But they’re still in development and not for sale just yet. Arca has said that the official prototype of their hoverboard, the Arcaboard, will be launched in 2017 but the expected sale price is around $20k – $25k!

The boards that are currently on the market and known as hoverboards, do not fly. Their wheels are firmly on the ground. A more accurate, but less cool, name for them is self balancing electric scooter, or self-balancing, battery powered, two-wheeled scooter.

When was the hoverboard invented? And who invented it?

Hoverboards (of the self balancing scooter variety)  first appeared in China in 2014, and are now widely available in the United States and worldwide. Hoverboards that actually hover are in their prototype phases as of 2017 but not widely available commercially.

How much does it cost to buy a hoverboard?

Self balancing electric scooters, known as hoverboards, cost around $200-$1000 dollars. Factors influencing the price include:

A reasonable entry level hoverboard for kids costs around $250-$350.

Quite reasonable compared to the hoverboards that actually fly – which cost around $20,000!

What are the two wheeled boards called?

The name of these two wheeled electric scooters is not standard. The trending name for them is hoverboards, but as they don’t actually hover, that name does get confusing. Some manufacturers prefer to use the more accurate terms like ‘two wheeled balance board’, ‘self balancing electric scooter’, or ‘self-balancing, battery powered, two-wheeled scooter’.

Read our reviews of hoverboards for kids here.

If you want to learn the difference between hoverboards and other types of electric scooters for kids go here.